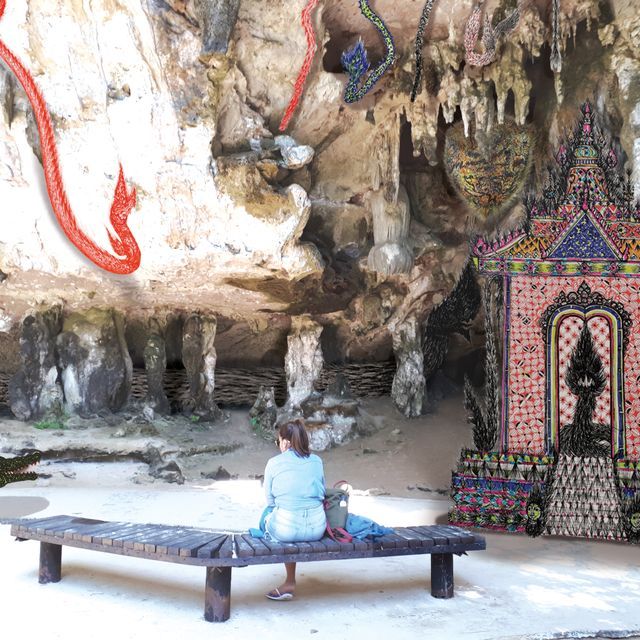 For Thailand Biennale 2018, Chusak Srikwan is fascinated by the beauty of the natural space and the old folklore about how Phra Nang Cave was created. It began from the family of Ta Yom Dueng whom the Naga agreed to help on a condition that ‘Nang’, the daughter of Ta Yom Dueng, would marry the son of the Naga. Later, Nang fell in love with the local man named ‘Boon’. The Naga found out and was very angry. On the wedding day, the Naga was transformed to be human and destroyed the ceremony. The hermit came to help but could not stop the fight, so the hermit cast a spell and made everyone turn into stone. The house of Nang and Boon became Phra Nang Cave. From this story, Srikwan creates three-dimensional characters, a Naga, a hermit, and a tiger. These are installed in the area near Phra Nang Cave. The work is done with a technique inspired by the local crafts and culture of Thailand’s southern provinces. The beauty, belief, love story, and mystery are presented in the space that exists in both the actual and mythical worlds. ภาษาไทย : คลิกที่นี่

Chusak Srikwan was born in Songkhla, and now lives and works in Nakornpathom, Thailand. He is also a lecturer at Department of Thai Art, Silpakorn University. Srikwan creates installations, paintings, sculptural projects, and performances inspired by the local shadow puppets found in the southern provinces of Thailand. 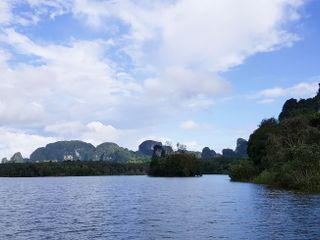