One of the most impressive temples to visit in Siem Reap, Bayon Temple is a picturesque and surreal temple harboring a myriad of smiling stone faces. It was built around the late 12th or early 13th century and served as the state temple to the renowned King Jayavarman VII. The temple sits at the center of Angkor Thom, the last enduring Angkor capital of the Khmer Empire.

The Bayon was originally built as a temple shrine dedicated to the Buddham, the only state temple to do so. King Jayavarman VII, different from other preceding kings, was a devout Mahayana Buddhist. After his death, the temple went through numerous changes to reflect Hinduism and later Theravada Buddhism by succeeding kings. 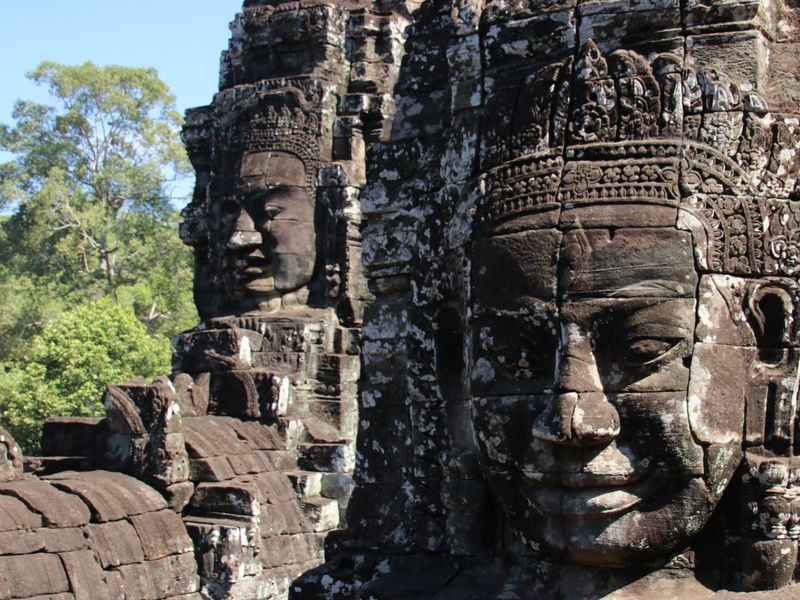 The presence of the stone faces, over 200, have led scholars to theorize about who the faces represent. One popular theory states that the stone face is a representation of King Jayavarman VII himself, due to the similarity of the faces to statues of the king. Another theory posits that the face represents the bodhisattva Avalokiteśvara or Padmapani, who is believed to be the embodiment of compassion of the Buddha. Some have also speculated that the king identifies himself as the bodhisattva.

The stone faces are on the towers of the upper terrace and around the central peak. Upon entering the temple, you will also find two sets of bas reliefs that depicting historical and mythological scenes, as well as ordinary life in the Angkor era.

The opening hour of the Bayon Temple is from 7:30 AM to 5:30 PM. Foreigners need to have the Angkor Pass to enter the temple.