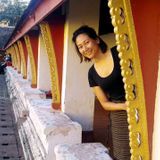 Nature at Its Best: Undisturbed Islands & Monkey Feeding in Pattaya!

From the moment Moo picked us up along with the driver, we knew it was going to be a great day. Her command of English and her friendliness made our journey from Bangkok to Pattaya very enjoyable. Her communication with us beforehand on the timing to pick up was great. She was concerned about traffic due to the holiday and even suggested for us to leave a little bit earlier to be safe. When we arrived at the boat she made sure that we were taken care of with a nice table. Our booking had stated that there would not be more than 15 to 17 other people on the ship but there were easily another 60 people. However, Moo made sure that we were well taken care of and got towels, snorkeling equipment, and were first in line for lunch. She even helped us bait our fishing rods. Our trip to monkey Island was fun but unfortunately, my husband was bitten in the face by a monkey. The shipped cleaned him up but they said he needed to see a doctor. The cruise director of the ship joined us to take him to the hospital which was paid for by Serenity yacht. The cruise director (Yura) seemed very knowledgeable but also informed us that every day someone gets bit on monkey Island and that the ship had been very full that day which was not the norm. Once arriving at the Pattaya hospital, my husband required painful rabies shots and received the first of four in the series. When we returned to Bangkok and called our doctor in the US, they checked with the CDC and they told him my husband needed to go back to a hospital to get a prescription for a drug to combat the Herpes B virus. Apparently it is very dangerous and monkeys transmit it to humans so medicine needs to be ingested as soon as possible. So, he went to a Bangkok hospital and we paid for that out of our own pocket because timing was of the essence. Even with the monkey bite which will make for a great story, our day was spectacular. Our trip in Thailand was mostly booked through another tour operator and this was an ad on trip. I only wish that I had discovered Moo earlier so we could have done other tours with your company before leaving Thailand.

Mookhom provided a great day in Ayutthaya. We were able to explore the temples and the floating market at our leisure and she even brought us to lunch at a local hidden gem. I had a great day with Mookhom.

Everything was great, from the beginning till the end.

+ 15 more travelers have enjoyed
the local experience with Mookhom